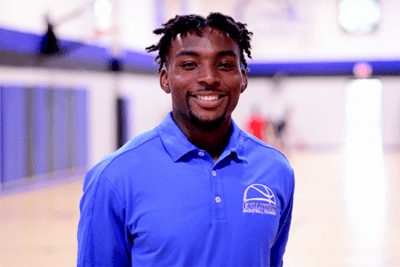 If there’s anything more consistent in my 27 years of life other than my mom, it’s basketball. Though I spent 5 years at James Madison University on a Football Scholarship, was the #1 Ranked 55M High School Hurdler in the Nation, and won endless other awards and accolades along the way in my athletic career, the game of basketball has defined me more than anything else.

My mom, my hero, my biggest fan, and the one person who I can say has seen the best and worst of me is the reason why I basketball has become what it is to me.

I was in second grade when we moved to Greenville, North Carolina and my mom became the Head head Coach coach of my first organized basketball team. It’s cliche that the best player on most youth teams is the coaches’s son, which was true, but it’s also more common than not to have that Head Coach coach be someone’s Dad, dadnot Mom as opposed to their mom. I can’t quite remember what our record was that season but I know that my mom would always push me to be the best player I could possibly be, not just on the team but on the court. Even at 7 years old she didn’t hold back from telling me when I was playing “too soft” or if I was tired saying, “the The best players don’t get tired” . “YYou don’t see Kobe Bryant or Allen Iverson coming out of the game…” So from e.” From there my competitive edge just grew. Her best basketball story of about me is when worked out one day at the park when I was in 3rd Ggrade and we . We ran about a mile to Shutmill Park and played 1 one-on 1-one; . She “claims” she beat me and , I went home upset, and didn’t speak to her for the rest of the day. Typicalhat is fairly typical of me when I lose at anything. Don’t talk to me.Just don’t talk to me.

Throughout my elementary and middle school years I played football, baseball, and ran track. Each season a new sport, but always paired with basketball. Whether it was AAU Babasketball in the Spspring with Bbaseball and or in the Ssummer with Ttrack, Travel travel Bbasketball league in the fall with Ffootball, or Winter winter Sertoma Rec and Mid-Maryland Middle School League, I was always playing Bbasketball. There were times that I would to go from leave baseball practice and change in the car to get basketball practice, rush from a track meet after my first event to get to my basketball tournament, play one or two games and then turn back around and run in the finals of the 400 Meter meter Dash, dash, or the Sunday evenings in October when I would have to go to from a Ffootball Ggame to to Travel League Basketball Practiceravel league basketball practice.. That was a normal for me growing up. Always ; always playing sports, yet forever hooping!

In High School I was a three sport athlete, no breaks (Ffootball, Bbasketball, And Trtrack). Though my love for basketball continued to grow , my abilities in Ffootball and Ttrack grew exponentially and only . Only growing to be 5’111, the opportunities to play anything higher than Division 2 n II didn’t manifest. Mid –way through my Ssenior year of basketball, I had also ran un the #1 time fastest time in the United States in the Iindoor 55M hurdles and at . At that point, I decided it was better that I stick with Ttrack and Ffootball and pursue a Full Scholarship at James Madison University.

Throughout my time at JMU, basketball was always my way of relieving myself of the stress of being a Full time, Division 1 I Sstudent-Aathlete. Though I was not supposed to during the season, I still played interra–murals and would frequent UREC on Saturdays and Sundays weekends during the off seasons getting some run in. . Occasionally in the summer we would get some games in with the basketball team, and those runs runs were real! I couldn’t get away. I loved the game and part of me would be missing without it! I still felt like I owed myself after not finishing my high school career.

So here we are in year 2015 when my return to basketball began with a group of 5th girls who that I had the opportunity to coach for 4 four years. They changed my life, they redirected my focus and helped me realize that mentoring, training, and coaching middle school and high school kids in the game of basketball was my passion. That group managed to have 4 All-District players this past year as Freshman in High School! I went from there to being a Head JV Coach at Harrisonburg High School and then landing my first Varsity Head Coach job last year at Turner Ashby High School. My head is in the game, my heart is in the game, and I have dedicated the majority of my life to this game of basketball. The opportunities with it are endless and the challenges are as well.

Evolution is my new home and home it is. I have found a new passion in training athletes full time in their individual skill sets to help them within the team game. More than just the skill training, Evolution has allowed me the opportunity to be myself and mentor the groups of kids that workout at my facility. I have been given an opportunity to give back so much of what was given to me…the great game of Basketball!